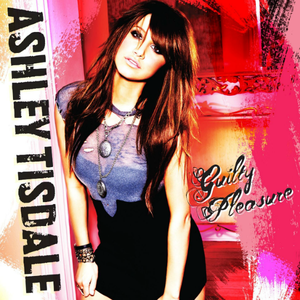 Guilty Pleasure is the second studio album by American pop singer and actress Ashley Tisdale released July 28, 2009 in the United States via Warner Bros. Records. The lead single from the album is the song "It's Alright, It's OK". Ashley began work on this album in the middle of January 2008, with the recordings of the first tracks at the recording studios located in Burbank, California. In an April 2008 interview with Extra!, she stated that she recorded a couple of songs for her next album and after shooting High School Musical 3 she would focus her attention on her second album. Later the year, she announced album would have "more rock and edgier" music. Tommy Page stated in his official website that he was working on Tisdale's second album. In an interview to Cosmopolitan, Tisdale announced the name of the album and it is sexier than the previous album. Tisdale stated the track "Hot Mess" is "about hanging out with a motorcycle bad boy that makes life more interesting" and the track "How Do You Love Someone?" is "about a girl who deals with the split of her parents". The album is indeed an authentic reflection of a girl growing up and speaking her mind on songs like the first single "It's Alright, It's OK". She worked with a host of top-flight record producers and songwriters, such as Kara DioGuardi, Toby Gad, Billy Steinberg, Emanuel Kiriakou, Alain Beaton (of the rock band Porcelain and the Tramps), Diane Warren and Swedish production team Twin (who co-wrote the Headstrong singles "Not Like That" and "Be Good to Me"). Tisdale co-wrote several tracks on this album, including "Acting Out", "Overrated", and two ballads "Me Without You" and "What If", which she co-wrote with Kara DioGuardi. She also confirmed the track "Masquerade". User-contributed text is available under the Creative Commons By-SA License; additional terms may apply.