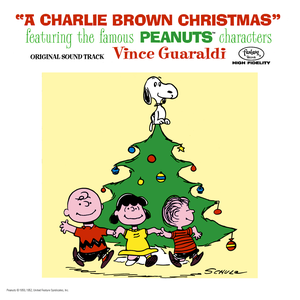 A Charlie Brown Christmas is the soundtrack to the 1965 Christmas special of the same name, performed by pianist and composer Vince Guaraldi and two sidemen: double bassist Fred Marshall and drummer Jerry Granelli. Mixing Guaraldi's original arrangements of holiday staples with original songs, all brought together in the form of warm, intimate and laid-back acoustic jazz, it is one of the most critically lauded Christmas albums of all time, and has been a consistent seller for almost five decades. Notably, the album features the song "Linus and Lucy", which despite being a character theme, has become the "bootstrapped" theme tune of Peanuts, the comic strip on which the special was based, and remains an inexorable part of the strip's identity in public consciousness. Another song on the album, "Christmas Time Is Here", featured in both instrumental and vocal versions, has become a Christmas standard in its own right. User-contributed text is available under the Creative Commons By-SA License; additional terms may apply.