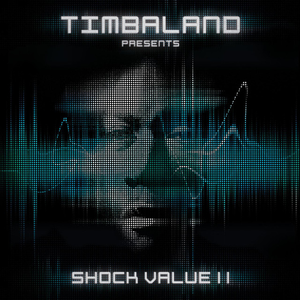 Shock Value II is the third solo studio album, from American record producer Timbaland serving as the second volume of the platinum-selling Shock Value which topped charts worldwide and received 16 platinum certifications. Initially slated for a 2008 release the project was pushed into 2009 and tentatively confirmed for November 23, 2009 through Blackground Records, however, it has been pushed back once more to December 7, 2009 in the UK and December 8 in the US. Timbaland spoke to MTV's Shaheem Reid back in July 2008 to confirm that he was working on the follow up to his platinum selling Shock Value. At the time he confirmed that he had one track with Madonna which although recorded for her album Hard Candy it had not been used and could end up on this album instead. He was insistent that he would also collaborate with Jordin Sparks, Beyoncé, Rihanna, the Jonas Brothers, Miley Cyrus and T.I. He also said that alongside T-Pain who will definitely appear, he hoped to get Jay-Z on board. Timbaland also told Invasion Radio in October 2009 that he had used PSP application Beaterator to produce some of the beats for Shock Value II as well as Jay Z's last album. Speaking on of the album in November 2009, Timbaland said: “ I’m so fortunate and blessed to be able to create a Shock Value II, I’m really proud of the caliber of artists on this album and all the work they put into making it a success. I can promise that no one has ever heard Katy Perry, The Fray, or Brandy sound like this before. It’s exciting because not only am I giving fans the best of me on each track, I’m giving them a glimpse of their favorite artist in a completely different light. This is an album that can be listened to from start to finish every single time because each song is so unique and the range of artists so diverse. I can’t wait for my fans to hear the collaborations. User-contributed text is available under the Creative Commons By-SA License; additional terms may apply.