Album: He Said She Said 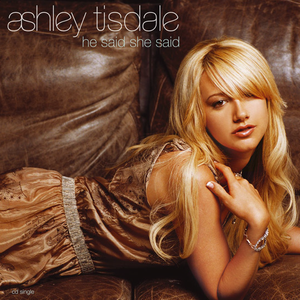 "He Said She Said" is a song of Ashley Tisdale's debut album, Headstrong and was released as the album's second single. The song was co-written by songwriter/producer J. R. Rotem and Ryan Tedder. The single was certified Gold by the RIAA for sales of 500,000 copies. The song was released as a single on iTunes on December 19, 2006 alongside "Headstrong", the title track from her debut album . It was released as a single in the UK and the U.S. on September 17, 2007, and in Germany on October 26. The song is featured in the 2008 monster film Cloverfield, on the 2007 album Now! 12 (the twelfth edition of the Canadian Now! series), and during the credits of the 2007 film Bring It On: In It to Win It. It was also on the Spanish version on Madden NFL 08. User-contributed text is available under the Creative Commons By-SA License; additional terms may apply.