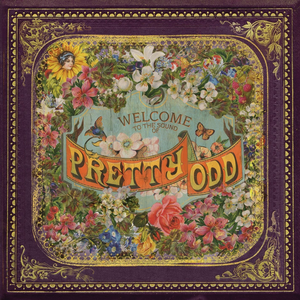 Pretty. Odd. is the second studio album by the American rock band Panic! at the Disco. Recorded at the Studio at the Palms in Paradise, Nevada with additional production at Abbey Road Studios in London with producer Rob Mathes, the album was released March 25, 2008 on Decaydance and Fueled by Ramen Records. Inspired by baroque pop and the works of The Beatles and The Beach Boys, the psychedelic-styled rock album differs greatly from the techno-influenced A Fever You Can't Sweat Out (2005). To begin work on the record, Panic at the Disco retreated to a cabin in the rural mountains of Mount Charleston, in the group's native state of Nevada. Upon growing dissatisfied with their final product, the band scrapped the entire album and spent time writing and recording Pretty. Odd. throughout the following winter. Production came together quickly and each song made the cut. Additional recording, such as strings and horns were produced at Abbey Road Studios. It is the only album to feature bassist Jon Walker, and last to feature vocalist and lead guitarist Ryan Ross, who both left the band in 2009, a year later after the album's release. The record received a mixed critical response and under-performed commercially in the aftermath of its platinum-selling predecessor. The album spent 18 weeks on the Billboard 200 and the album's lead single "Nine in the Afternoon" went gold. The album has since gathered a small cult following and has sold 422,000 copies by 2011. User-contributed text is available under the Creative Commons By-SA License; additional terms may apply.