Album: A Farewell to Kings 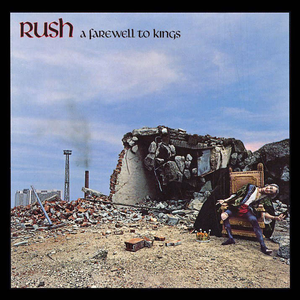 A Farewell to Kings is the fifth studio album by Canadian progressive rock band Rush, released in 1977. The album was recorded at Rockfield Studios in Wales and mixed at Advision Studios in London. A Farewell to Kings would become Rush's first US Gold selling album going Gold in almost two months of its release and eventually Platinum. Geddy Lee played his bass lines on acoustic bass while writing them and came up with guitar lines also. The birds heard on "A Farewell to Kings" & "Xanadu" were recorded outside near Rockfield Studios. Track listing All songs music written by Alex Lifeson and Geddy Lee with lyrics by Neil Peart, except where noted. "A Farewell to Kings" (Music: Lee, Lifeson, Peart) – 5:51 "Xanadu" – 11:08 "Closer to the Heart" (Lyrics: Peart, Peter Talbot) – 2:53 "Cinderella Man" (Lyrics: Lee) – 4:21 "Madrigal" – 2:35 "Cygnus X-1" (Music: Lee, Lifeson, Peart) – 10:25 Song information A Farewell to Kings The name of the album itself is clearly derivative of Ernest Hemingway's classic novel A Farewell to Arms. It often deals lyrically with the theme of departure, and through departure, a sort of ascension to a state of better being; this can be said to echo the evolution of society from the days of medieval feudalism and autocratic monarchy, hence "a farewell to kings". Xanadu The lyrics for the epic "Xanadu" were inspired by the 56-line poem Kubla Khan, written about 1797 by British poet Samuel Taylor Coleridge. Lee, Lifeson and Peart worked overtime on this track, each utilizing a number of instruments to effect the performance. "Xanadu" also marks a rare occurrence of Geddy Lee on rhythm guitar (live). Other tracks with Lee on guitar include "A Passage to Bangkok" and "Resist" (live). Closer to the Heart "Closer to the Heart" is one of Rush's most popular songs, seeing a fair bit of radio airplay during a time when the band was in the middle of its 'epic song' days. After a couple of near-misses earlier in the decade with "Fly By Night" and "Bastille Day", "Closer to the Heart" finally landed them their first hit single in the United Kingdom, reaching #36 in the UK Singles Chart in February 1978. The acoustic guitar intro was written by Geddy Lee. Peter Talbot, a friend of the band (who is also mentioned in the credits for All the World's a Stage) wrote the first four lines and Neil Peart wrote the remainder of the lyrics. The song has been part of the set list on nearly every tour since 1977. The band dropped "Closer To The Heart" for the bulk of their recent tours in support of Vapor Trails and their 30th Anniversary because, according to Peart, "we got sick of it." Cygnus X-1 The final track is another epic about a fictional space voyage to "Cygnus X-1". Inspiration for the story within the song was found in the observation of an X-ray source in the constellation Cygnus. Considered to be one of the most likely black hole candidates in the universe, Cygnus X-1 was discovered in the early 1970s by Canadian scientist Tom Bolton, using the facilities of the David Dunlap Observatory at the University of Toronto. The theme of the track would be continued in "Cygnus X-1 Book II: Hemispheres", the lead and title track of Rush's next album, Hemispheres. Like "The Necromancer", and the end of "2112", "Cygnus X-1" has an added synthesized voice at the beginning of the song. Other Tracks The lyrics of "Cinderella Man" are based on the Frank Capra film Mr. Deeds Goes to Town. "Madrigal" is perhaps one of the band's softest songs of this time period. It is also one of Rush's shortest songs at 2:35. The only other Rush songs that are shorter are "Need Some Love" (2:19), "Malignant Narcissism" (2:17), and "Hope" (2:02). Personnel Geddy Lee - bass guitar, twelve string guitar, Mini-Moog and bass pedal synthesizers, vocals Alex Lifeson - electric, acoustic and classical guitars, bass pedal synthesizer Neil Peart - drums, cymbals, cowbells, orchestra bells, wind chimes, triangle, bell tree, vibra-slap, tubular bells, temple blocks Terry Brown - engineer Pat Moran - engineer Hugh Syme - art direction and graphics Yosh Inouye - cover photography Roger Stowell - sleeve photograph Fin Costello - liner photographs George Graves - mastering on original album Bob Ludwig - remastering Charts Album - Billboard (North America) Year Chart Position 1977 Billboard's Pop Albums 33 Singles Cover Information "Closer to the Heart" Released: Written by: Geddy Lee, Alex Lifeson, Neil Peart & Peter Talbot Produced by: Rush and Terry Brown Chart positions: #76 US Hot 100 "Cinderella Man" Released: Written by: Geddy Lee & Alex Lifeson Produced by: Rush and Terry Brown Chart positions: Remaster Details A remaster was issued in 1997. The tray has a picture of star with man painting with THE RUSH REMASTERS printed in all caps just to the left. All remasters from Rush through to Permanent Waves are like this. This is just like the cover art of Retrospective I. The remaster has all of the original vinyl packaging including the back cover(all black with puppet strings) and inner sleeve photos of the band on stage and star with man logo reinstated(which were missing on the original CD issue). User-contributed text is available under the Creative Commons By-SA License; additional terms may apply.